Fly Fishing : When The Fishing Is Good

When is the fishing good? I would argue that actually catching fish has little to do with it. I find more pleasure simply watching the jeweled color salmonids chase my fly, snubbing it at the moment I think I may actually get a bite. In the unlikely event I do actually catch a fish I always let at least the first one go to appease the fish gods. Unfortunately they seldom see fit to send me another one.

This past weekend I was lucky enough to spend a few days up in one of the most magnificent places in the county. The Eastern Sierras, where the mountains rise up like fangs over a level plain of sage scrub ready to devour any who attempt to climb their jagged peaks. Good friends in tow we took a safer route, to lower elevation snow melt fed lakes and streams. After hitting up Rock Creek Lake we visited a hidden little gem of a spot north of Mammoth.

This trip was also the first time my husband and I attempted to fly fish. Fly fishing is my kind of fishing, its beautiful, ascetic, physical and really hard to be good at. Being someone who is perpetually ok at things and never really good at just one thing I decided yes I want to learn fly fishing. I like a challenge, I played the violin for over 10 year how hard could it be? Well I think by the end we both had our casts down, save a few flies lost in the pine trees, another sacrifice to the fishing gods. 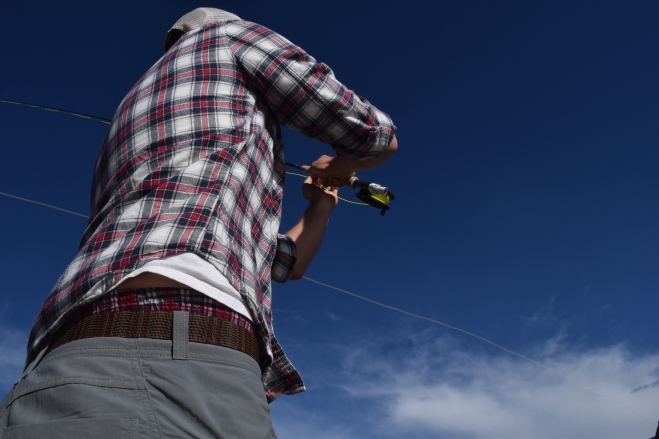 We hit a few more spots coming down the mountain, ending our trip at the Mount Whitney Fish Hatchery . Like every trip I have ever been on this one went too fast and I was ready to throw my hands in the air run up the mountain and never come back to the real world. Lucky for the real world we had a Smoke Jensen: Last of the Mountain Men audio book playing in the car and I needed to know how it would end. Till next time high lonesome.