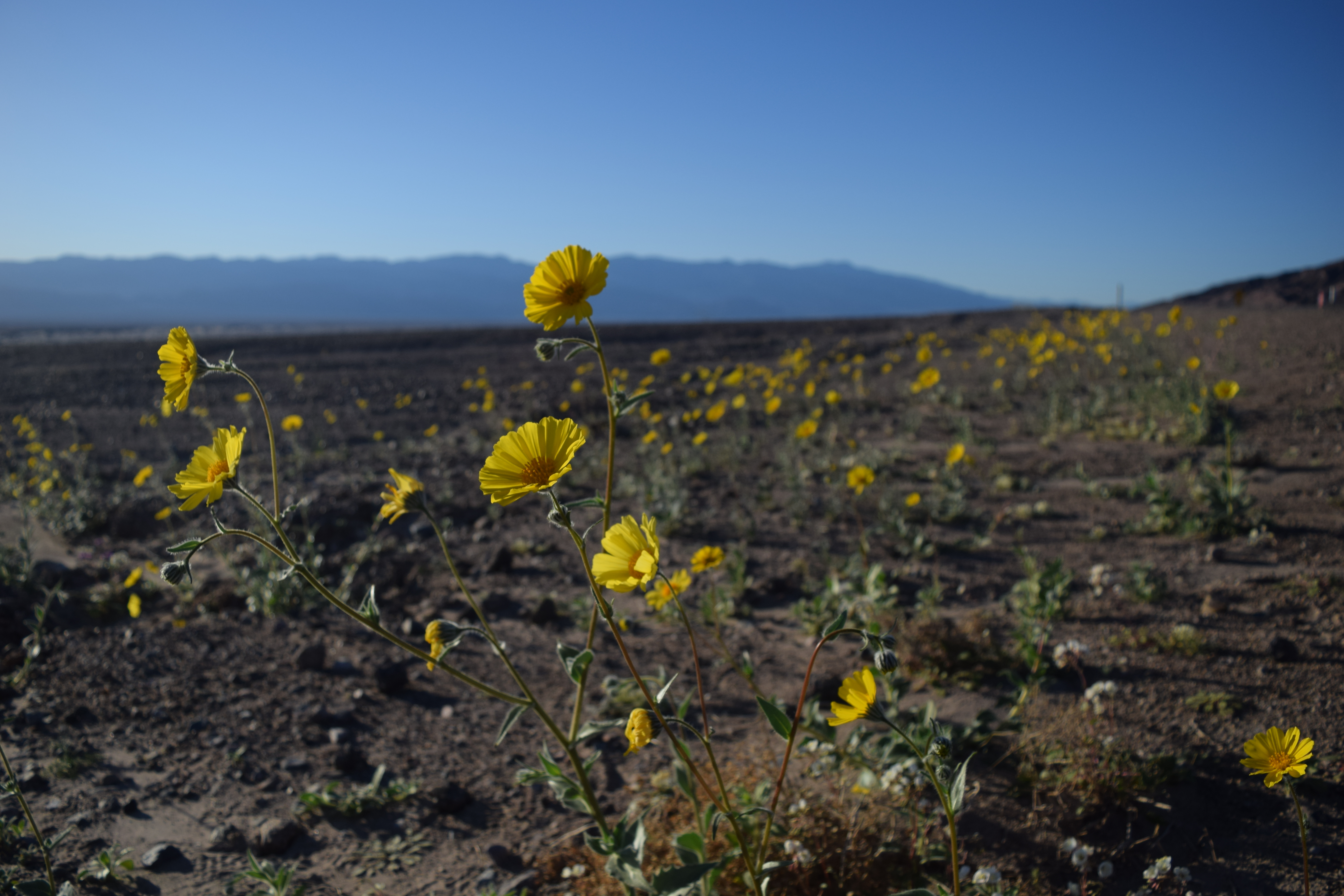 Death Valley National Park is the largest park in the lower 48. At 3.4 million acres the park has a lot of ground to cover. This was our second trip to the park and we stuck mostly to the north end. We took the 395 north to Big Pine then took a right on 168 to Death Valley Road towards crankshaft junction. It is a long and lonely road that winds through the Inyo mountains; passing old mine shafts and cactus strune hillsides. 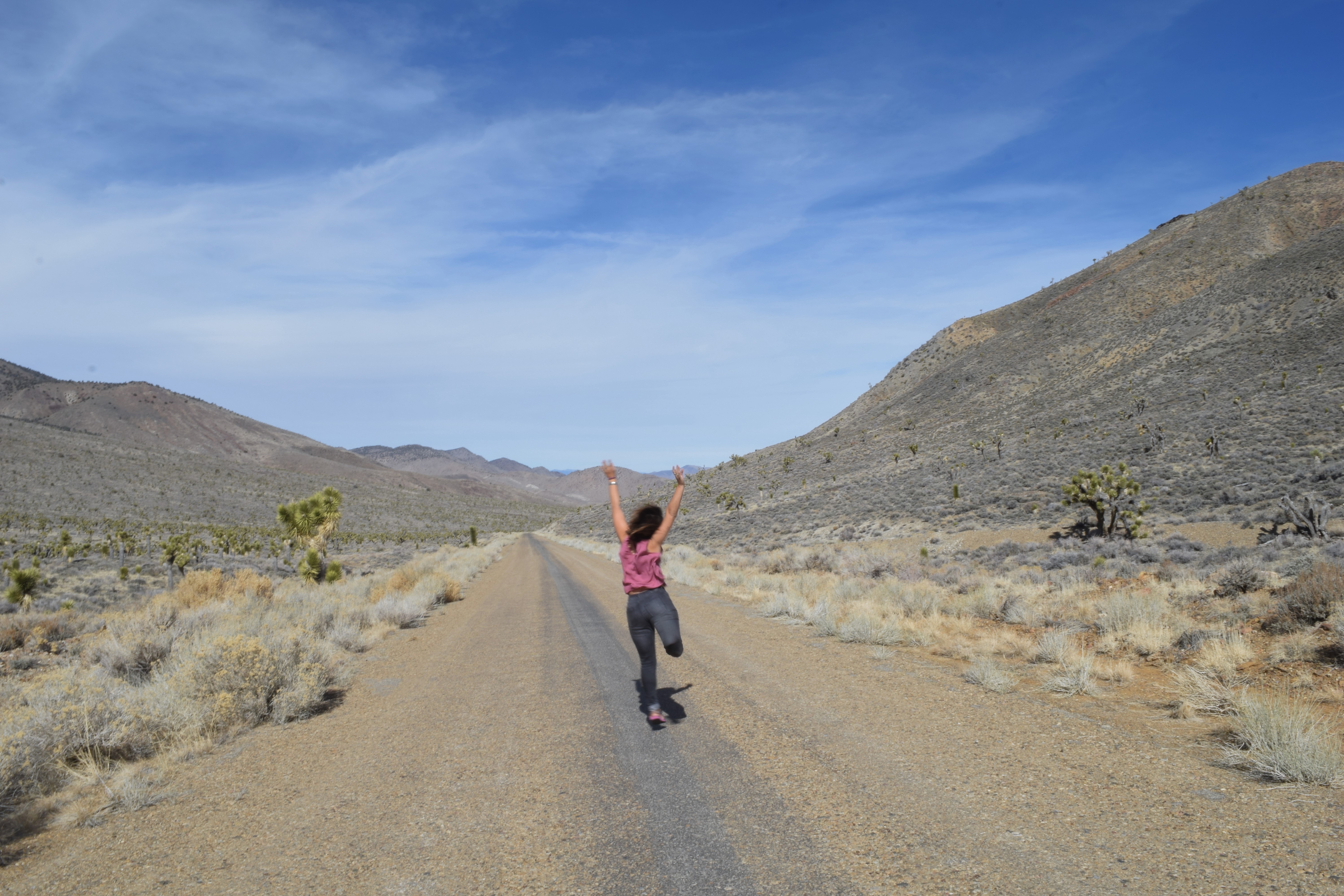 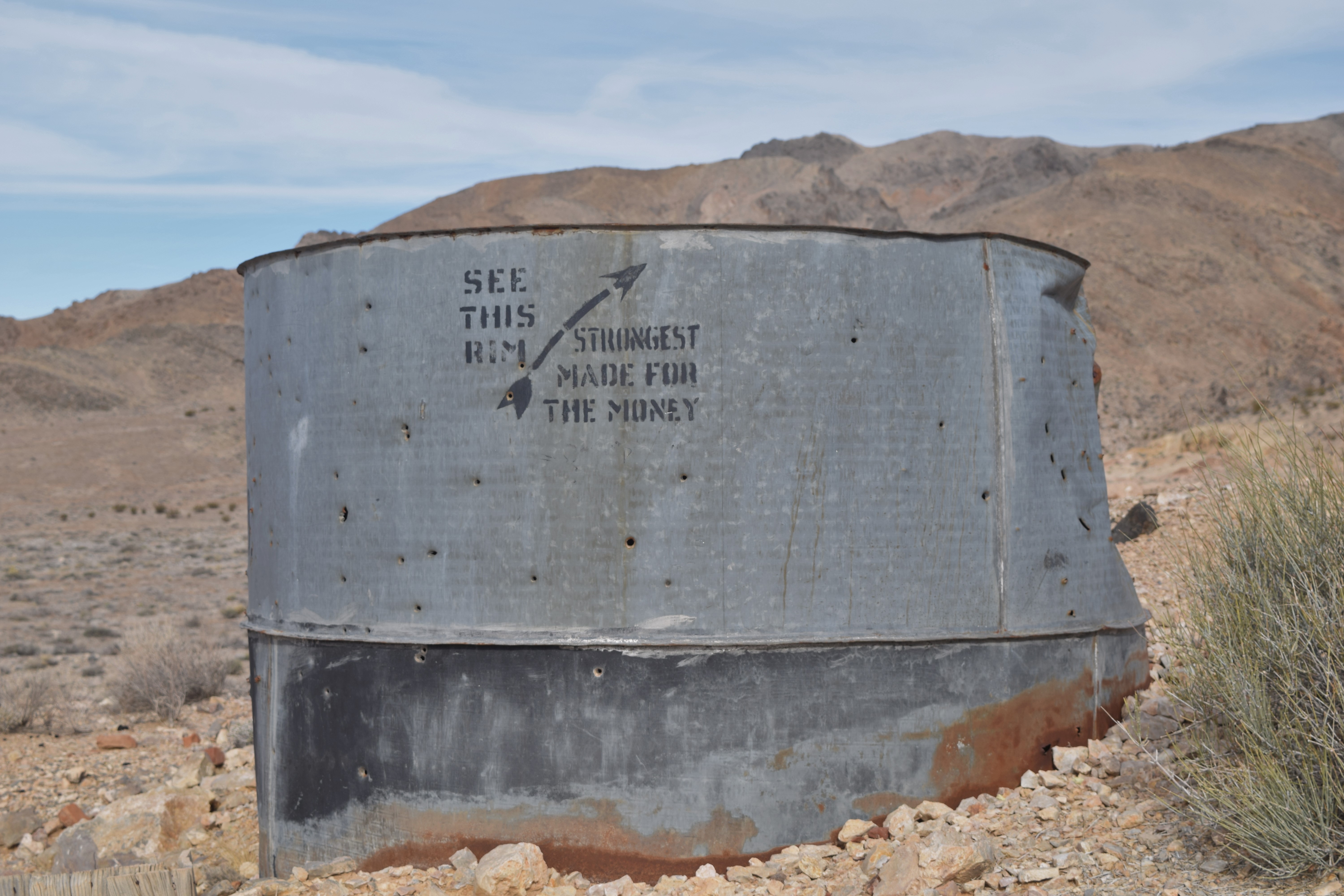 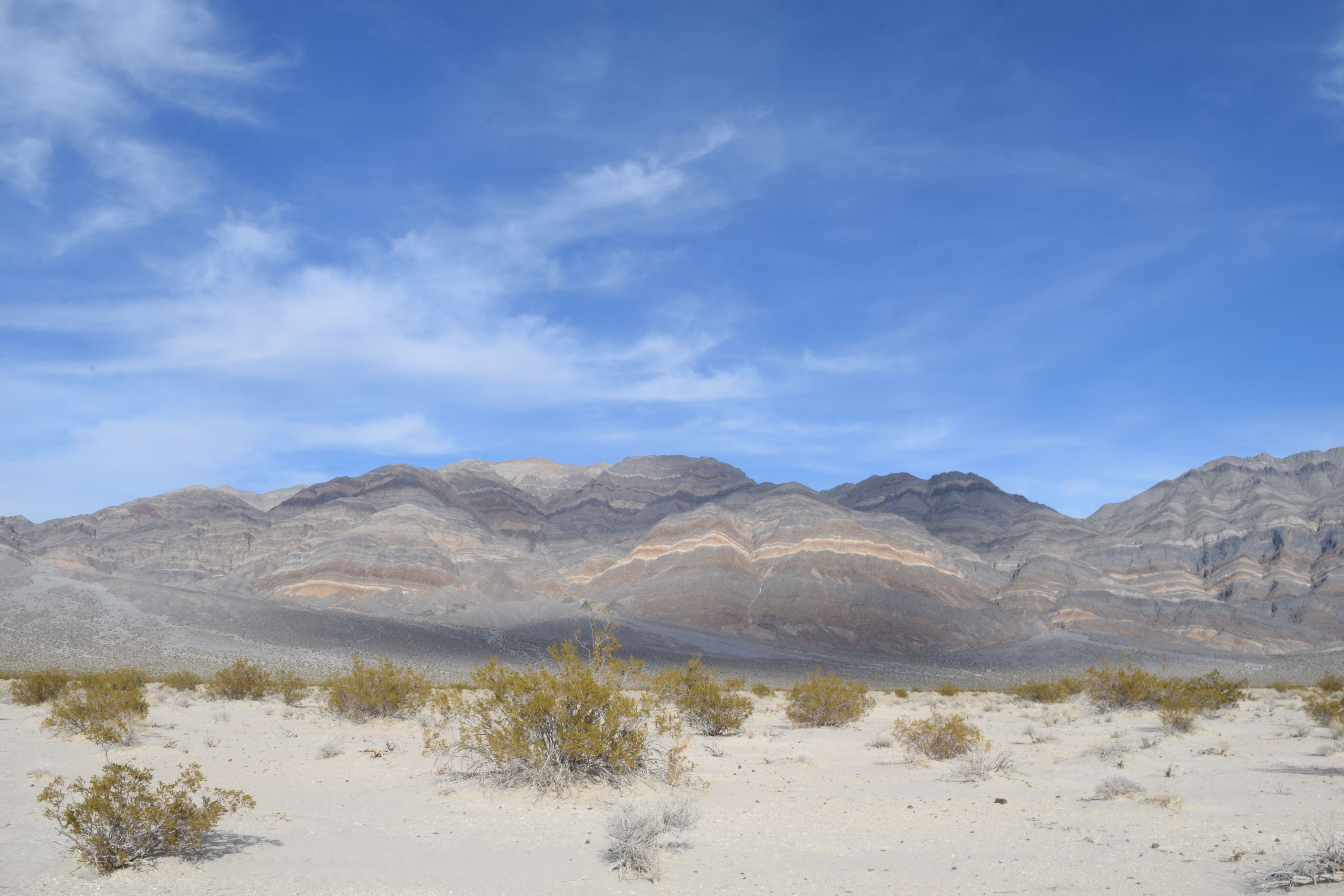 We spent our first night at the Eureka Dunes. There is plenty available dry camping with stone picnic tables and fire rings. The Eureka Dunes are the second highest in the United States and stand 680 feet above the valley floor. The striated limestone bands of the Last Chance Mountains making up the background of Eureka Dunes remind me of an argyle sweater. If the mountain range were a nerdy book worm the Eureka Dunes would be its funky burner best friend. Hiking to the top of the dunes takes some toned calf muscles and a good sense of humor as your may slide down while attempting to go up. I’m sure ascending the dunes in the summer would be a different task entirely but in the winter the dunes soak up all the surrounding moisture from the valley like a sponge. The result is cool sand on your feet. A nice treat as you sweat your way up the sliding sand.

I work outside for a living and during the work week I avoid the sun. I wear long sleeves a wide brimmed hat, and long pants, I look like a regular expert outdoors woman. Sometimes I even wear gators and always appropriate foot gear. On the weekends however I sometimes prefer a more laid back approached to my “technical” wear. As the Eureka dunes are a sandy dreamscape of singing sand and endemic beetles I thought a bright yellow sports bra, cut off shorts, pink sandals, and a camo fanny pack would be an appropriate choice for our short but strenuous hike. Throw in some 90’s inspired shades and we are good to go! 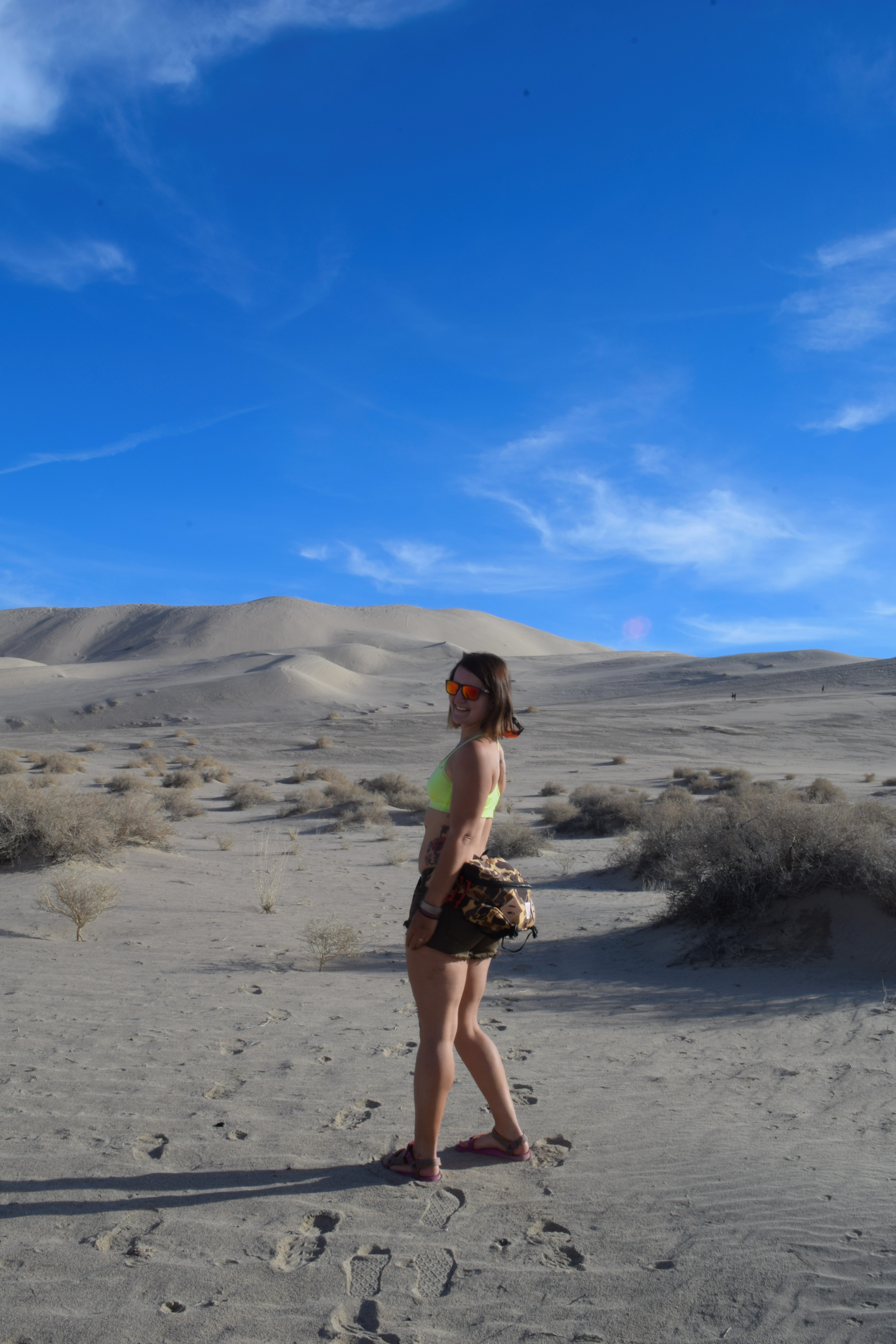 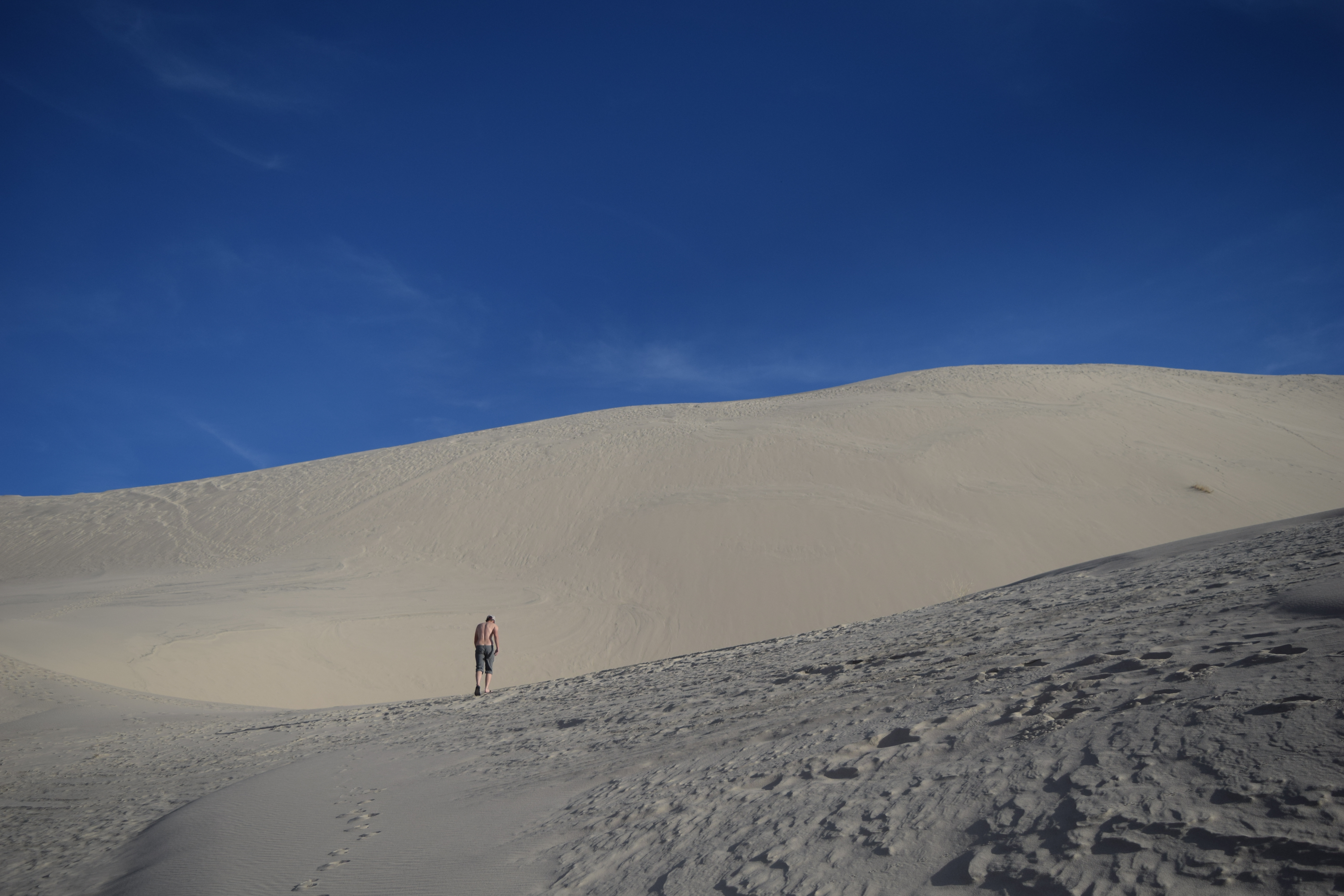 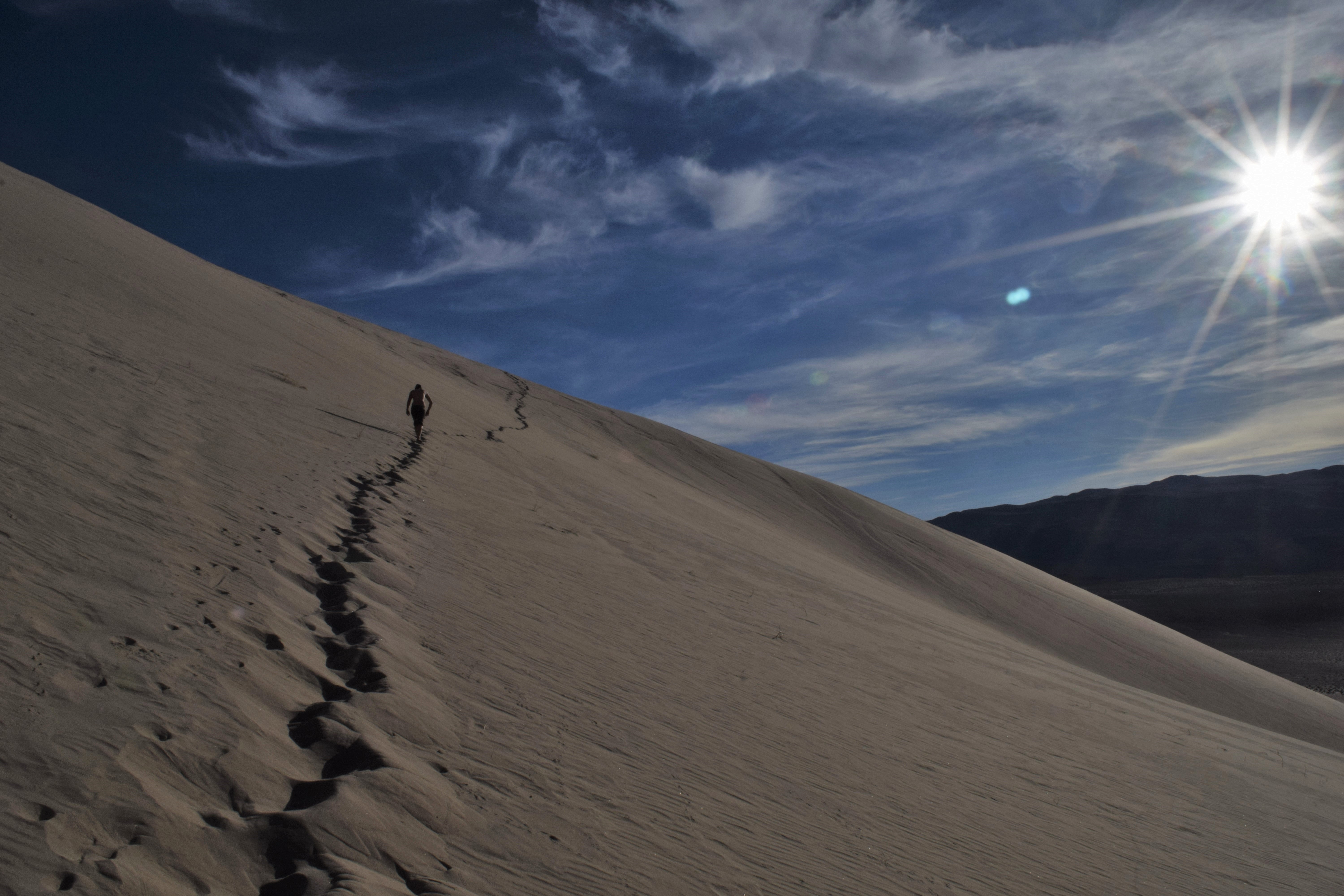 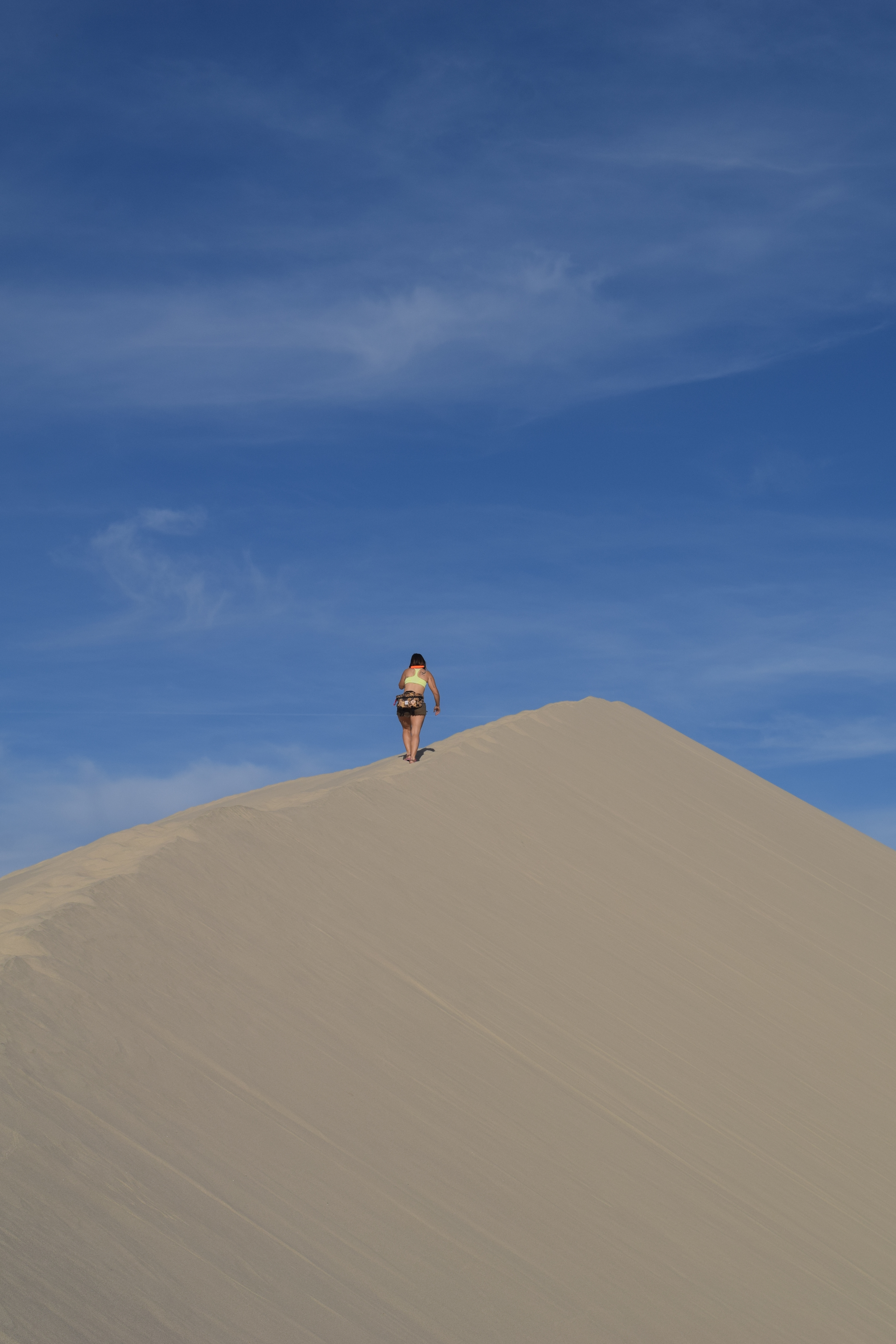 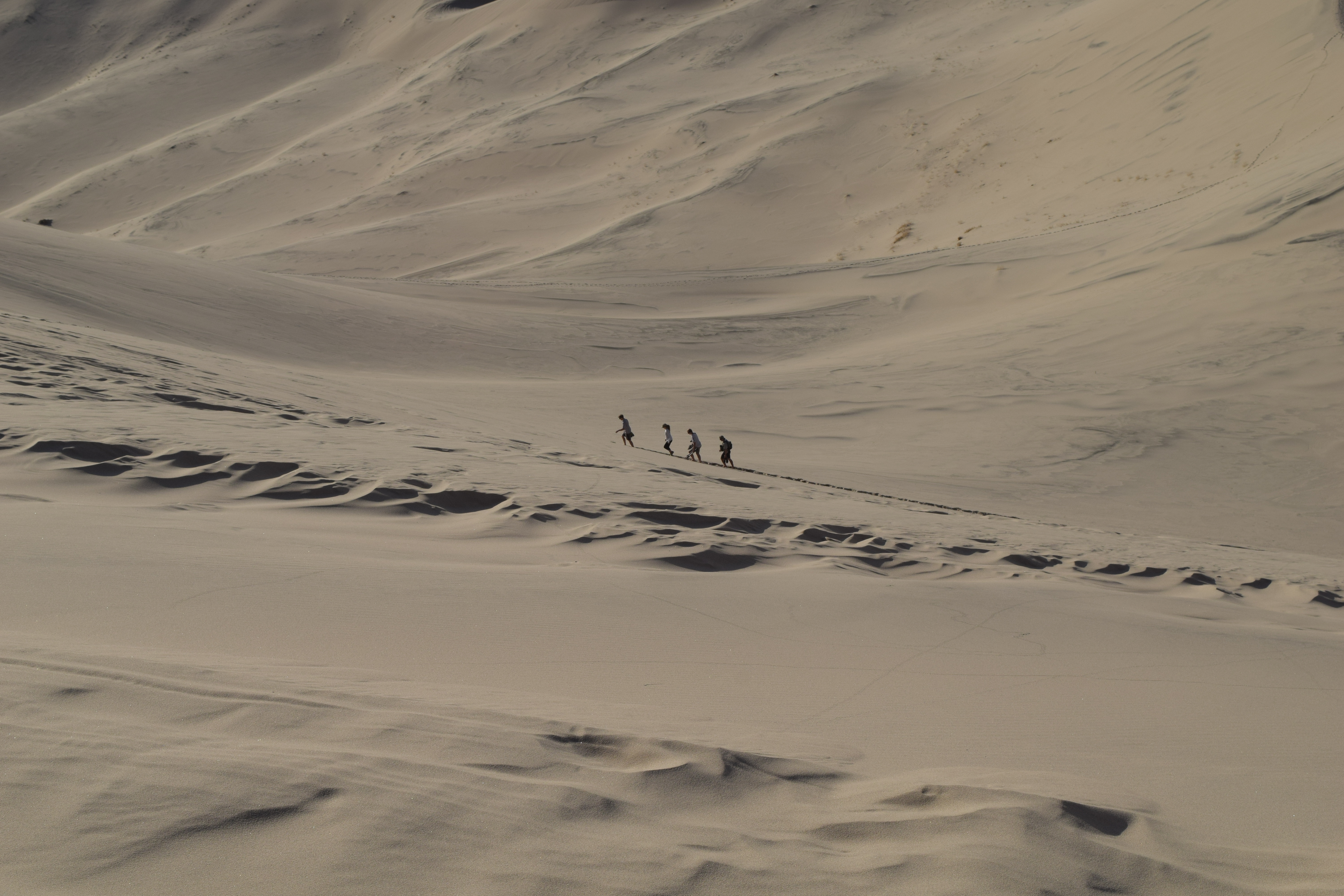 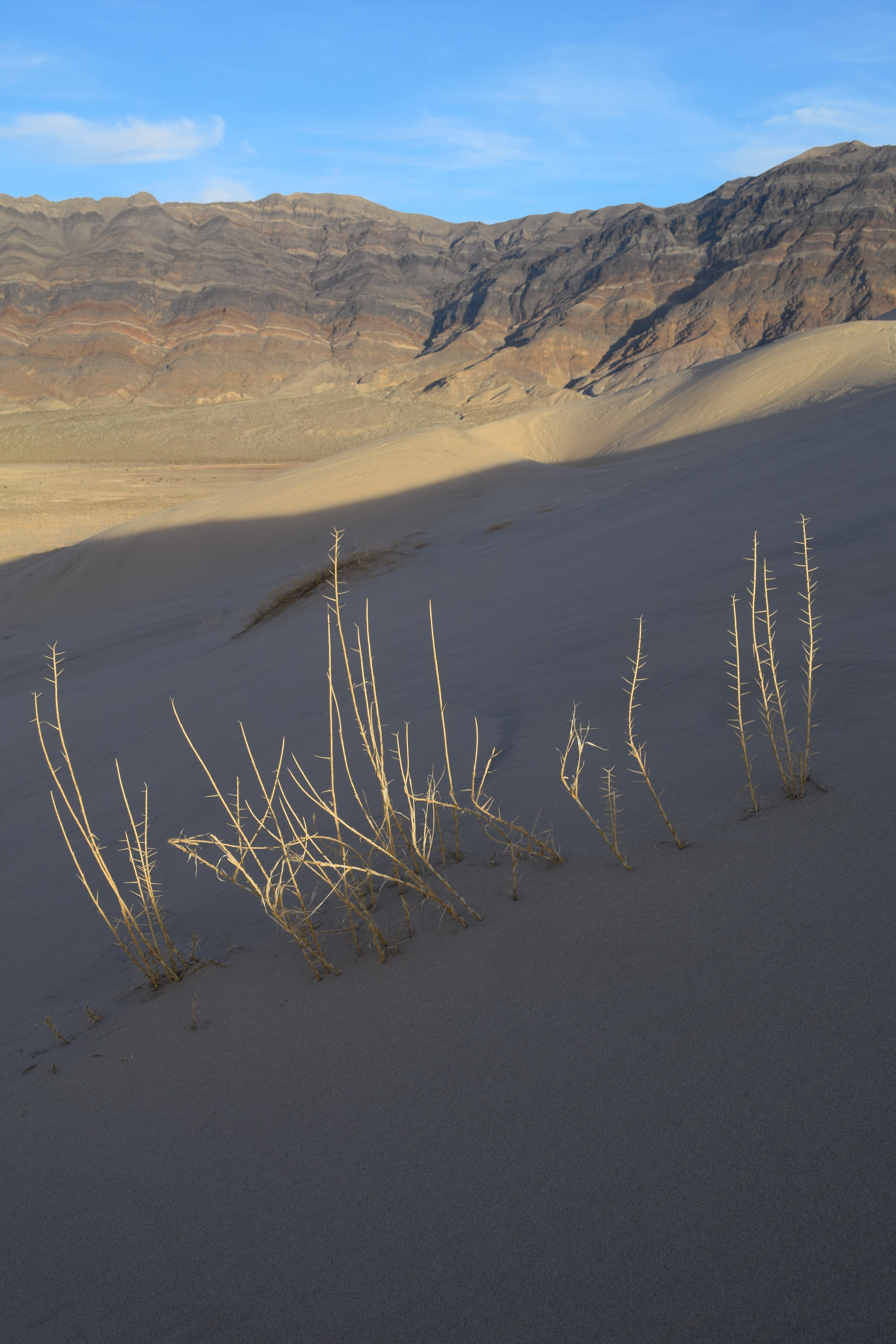 There are three major sets of dunes in Death Valley National Park, Eureka, Panamint, and Mesquite. I have been lucky enough to visit all three and although I would have to say the Panamints are my favorite I do think that Eureka Dunes are the most stunning. Along with being some of the highest dunes in North America they are also home to five species of endemic beetle and three endemic plants. These beetles and plants can be found nowhere else in the world. They only live in the 1 mile by 3 miles patch of dunes in the Eureka Valley. If this did not make the place special enough the sand has also been known to “sing”. Under the right conditions sand shifting down the dry slopes will hum, the dunes have to be very dry to hear the singing. When we visited there was a lot of moisture in the dunes so we did not hear the song, but there is always next time.

We hiked up the dunes as the sun set over the mountains and made it back to camp just before the air began to cool off. The desert is harsh in her gift giving. The sun can be too strong for your eyes, it burns your skin, and you sweat and strip off layers. Within a 12 hour period the desert can turn into a world of ice. With no moisture to hold in the heat of the day temperatures can plummet once the sun goes down. This stark contrast is part of what makes the deserts of the earth such dangerous places for us mere mortals. Come unprepared to this unforgiving environment and you will likely be in a world of pain.

The night was cold but comfortable. We have spent enough time in the desert to know of her fickle ways and were well prepared with warm down sleeping bags and extra wool blankets. The next morning, after an “everything but the kitchen sink” breakfast sandwich we packed up camp and headed toward the Racetrack. The Racetrack is a popular spot in Death Valley. It is most well know as the place with the sailing rocks. Under very specific conditions large rocks will move on their own across the Racetrack playa. One theory is that it takes a layer of water on the playa and high winds in order for the rocks to move, another theory is a thin sheet of ice is needed along with those howling winds. Either way it is a rather mysterious place, the rocks making little tracks across the playa as if they have a mind to be someplace important. After hearing about the Racetrack for years and seeing photos of it I was very excited to see it. The drive out to the Racetrack is long, rocky and wash boarded; it is infamous for flat tires. Although the stones and their tracks were strange and beautiful I think my favorite part about the drive was finally seeing the playa after the long dusty drive. Death Valley is the most incredible place to me because you can almost imagine what it was like in wetter times. The valleys must have been so green the playas were lakes filled with runoff from the mountains. Now when the Racetrack playa comes into view all you see is an expanse of white, the silt of thousands of years accumulated at the lowest spot in the valley. A playa is the flattest naturally occurring surface in nature. Perhaps that’s why the playas of the world seem otherworldly and strange; nature making something so uniform and perfect. 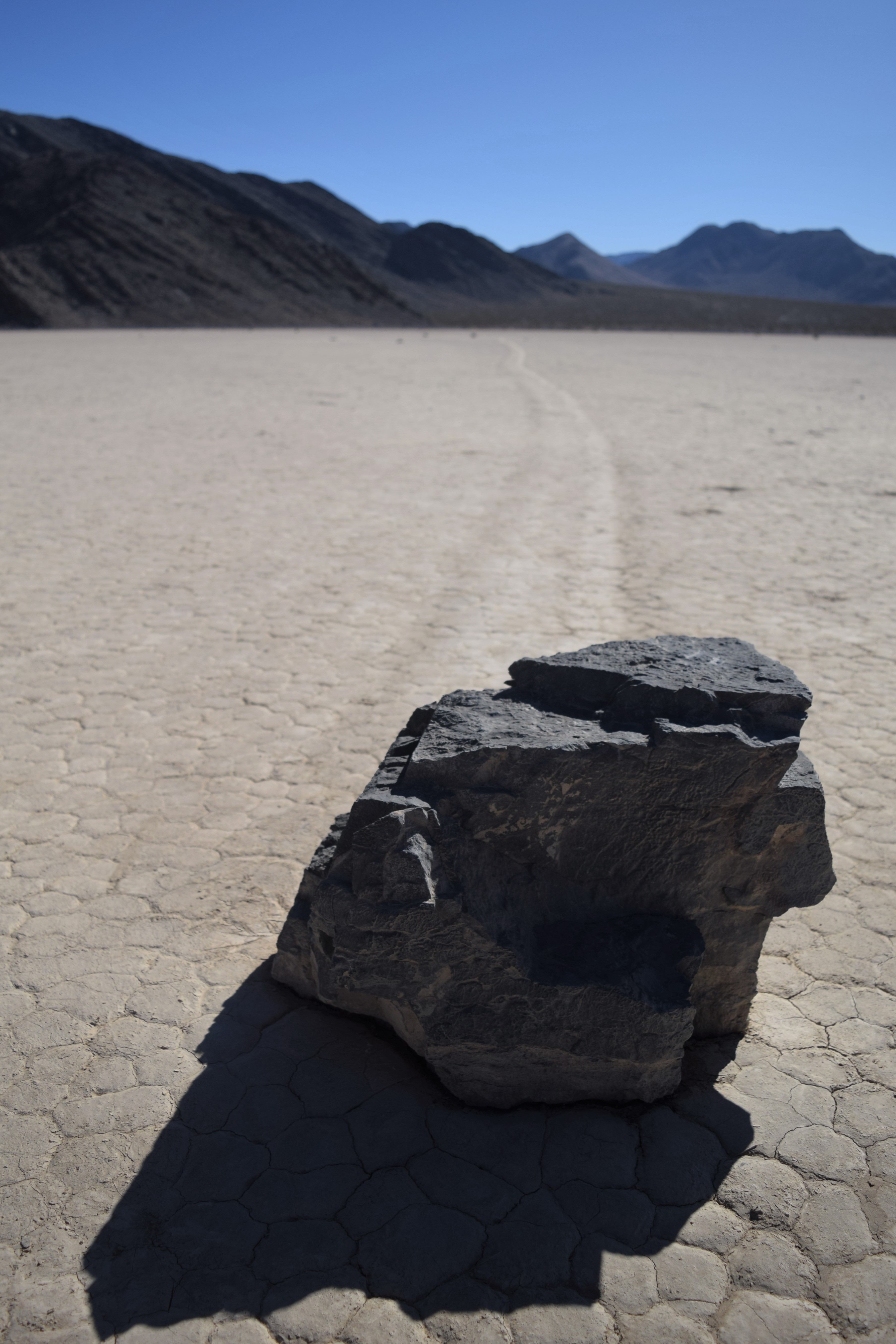 I could never say that I have seen all there is to see in Death Valley National Park. I have hit all the popular spots at least, but with over 3 million acres there are still many canyons to explore, springs to discovers, and hardy desert species to check off my list. The best part about Death Valley is that  somehow it seems like it a secret place that no one has figured out is there yet. Sure the main roads and tourist spots can be crowded but drive up any dirt road or hike up a dry canyon and you will likely not see another soul. Stay tuned for more on Death Valley and our hike to the Panamint ghost town through Surprise canyon.